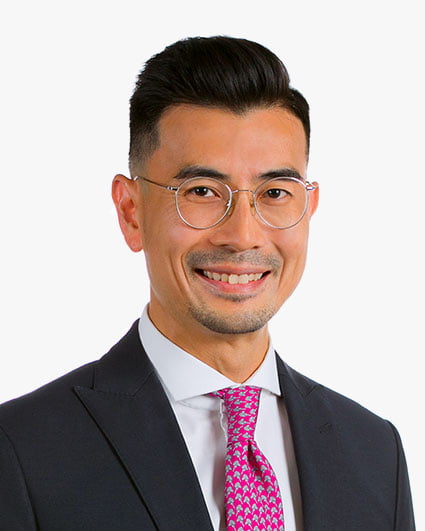 Jonathan is the Founder and Managing Director of Tembusu Law. He is also the founder of LawGuide Singapore, a prominent legaltech startup which successfully created and launched Singapore’s first legal chatbot in 2017.

He graduated from the University of Bristol (UK) in 2002 and was called to the Bar of England and Wales (Gray’s Inn) in 2003 and also admitted as an Advocate & Solicitor of the Supreme Court of Singapore. Prior to founding Tembusu Law, Jonathan was a Partner in a leading homegrown Singapore Law Practice where he helped to drive innovation and strategy and had oversight of internal functions including organisational development, talent management, regional and international business growth and strategic partnerships.

He has a broad and varied general practice dealing with both contentious and non-contentious areas of law. He was formerly a Prosecutor in the Attorney-General’s Chambers and the Ministry of Manpower, and he is experienced in civil and criminal litigation and dispute resolution matters, having represented clients for a diversity of cases at all levels of the Singapore Courts and also participated in proceedings conducted under the Arbitration Rules of the International Court of Arbitration at the International Chamber of Commerce Centre (ICC).

Some of the civil and regulatory litigation matters in which Jonathan is retained on an on-going basis include the following: –

During his time at the Attorney-General’s Chambers, Jonathan was also a part of the successful prosecution team for high-profile cases such as Public Prosecutor v Vidya Shankar Aiyar [2003] SGDC 327 and Public Prosecutor v Chan Cheng Khoon (2004; unreported) (the Everitt Road neighbours’ dispute case).

In addition, Jonathan has conducted trials involving offences under the Penal Code, Misuse of Drugs Act, Workplace Safety and Health Act, Employment Act, Employment Agencies Act and the Employment of Foreign Manpower Act, including the prosecution of a large-scale case lasting more than 40 days of trial concerning the illegal employment and deployment of foreign workers by a syndicate.

Notably as Defence Counsel, Jonathan received recognition from the Ministry of Foreign Affairs and Trade of the Republic of Korea in 2012 for his dedication and professionalism in advising and acting for a Korean national who was charged in the Singapore Courts with drug-trafficking offences which carried the death penalty.

Some of the cases in which Jonathan has been involved in as Defence counsel include the following: –

In addition to his domain expertise in handling litigation work, Jonathan is also experienced in advising on and coordinating corporate and commercial transactions including in relation to startups, family offices and investment holding companies, equity offerings, share acquisitions and disposals, joint ventures as well as mergers & acquisitions.

Jonathan regularly represents pro bono clients in criminal matters and is a volunteer lawyer on the following panels: –

He believes that access to information ultimately leads to and is necessary for access to justice, and it’s something that he’s committed to fulfilling in both his personal and professional life. With LawGuide Singapore, Jonathan is on a small, personal mission to help make information on basic, but essential, areas of Singapore law easier for the public to find, understand and use – today, LawGuide Singapore is Singapore’s most-followed social media legal information platform, having also launched Singapore’s first legal chatbot kiosk in 2018 at Chong Pang Community Club – these initiatives were singled out for favourable mention in the media by The Straits Times and in the keynote address by Senior Minister of State Indranee Rajah, Ministry of Law and Ministry of Finance (as she then was), at the Future Lawyering Conference 2017. As its Founder, Jonathan was recognised and named by Asia Law Portal in its “30 people to watch in the business of law in Asia in 2019″.