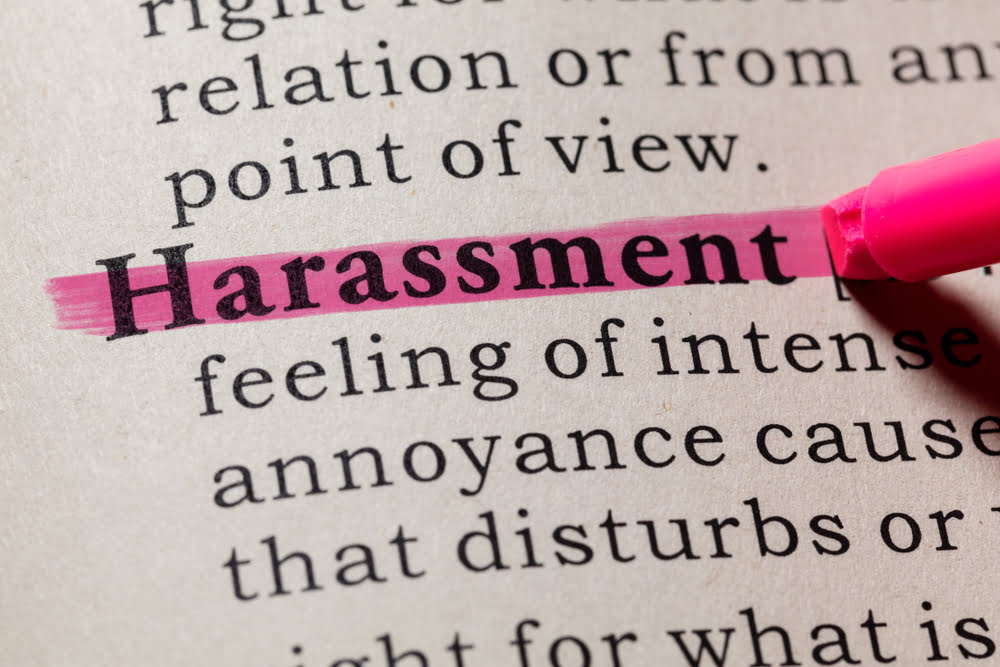 Harassment is a criminal offence under Singapore law and is punishable with a jail term, fine, or both. Different from assault, harassment generally refers to the non-physical forms of harm or intimidation.

It’s important to note that both individuals and entities (such as companies or associations) can be found guilty of harassment. Sections 3-7 of the POHA define what counts as harassment under Singapore law, which includes:

1. Intentionally harassing, alarming or causing distress to another party

According to section 3 of the POHA, a party who uses any form of threatening, abusive or insulting communication, words or behaviour against another party is guilty of harassment if their intention is to cause alarm or distress. This includes both online and offline behaviour.

For example, if X was fired from their job and writes and sends a threatening letter to their ex-manager Y, causing Y to feel alarmed and afraid, X is guilty of harassment under section 3 of the POHA.

If found guilty of causing intentional harassment, alarm or distress, the party can be fined up to $5,000, imprisoned for up to 6 months, or both. For a repeat offender, these maximum penalties are doubled (up to $10,000 fine and 12 months’ imprisonment).

2. Behaving in ways that are likely to cause alarm or distress to another party, even when there is no intention to do so

It is possible for a party to be found guilty of harassment even if that was not their explicit intention. Section 4 of the POHA states that as long as the victim has been alarmed, distressed, or been subject to harassment because of another’s abusive or insulting words or behaviour, that party is guilty of harassment.

For example, X published a vulgar tirade ranting about their classmate Y on a well-known website that many of their peers had access to. One of those peers found the post, showed it to Y, and Y became distressed over it. In this case, X is guilty of harassment under section 4 of the POHA.

To defend against this type of harassment claim, the accused must prove that:

If found guilty of harassment under section 4 of the POHA, the individual or entity is subject to a fine of up to $5,000, but no jail time. However, if the party is a repeat offender, the maximum penalties will be raised to $10,000 in fines, 6 months’ jail time, or both.

3. Instilling fear through provocation of violence

If a party behaves in a manner that causes others to believe that unlawful violence will be used against them, they are guilty of harassment under section 5 of the POHA. In addition to direct threats against a specific victim, undirected threats of violence (for example, shouting in public to no one in particular while threatening violence and causing alarm) are still considered acts of harassment.

The maximum penalties for instilling fear due to provocation of violence is a fine of up to $5,000, imprisonment of up to 12 months, or both. These are doubled for repeat offenders.

4. Insulting or behaving in an indecent, abusive or threatening manner toward public officials or public service workers

For example, two men were charged with harassment in 2020 for their use of verbally abusive or insulting language against public officials (a police officer and a Singapore Food Agency officer) during the course of their work.

For harassment against public officials or public service workers, the maximum punishment is up to $5,000 in fines, imprisonment of up to 12 months, or both.

As defined by section 7 of the POHA, examples of unlawful stalking include:

If any of these actions cause distress or alarm to the victim, the party is guilty of harassment due to unlawful stalking. Perpetrators are subject to a fine of up to $5,000, imprisonment of up to 12 months, or both, with maximum penalties doubled for repeat offenders.

Across sections 3 and 4 of the POHA, it is mentioned that the publication of any identity-related information of the target person or relations of the target person is considered harassment. This is referred to as doxxing – where “internet vigilantes” publish personal information about someone in the hopes of shaming or distressing them – and was added to the POHA as of 1 January 2020.

This was in response to an increasing number of such harassments in recent years, most notably with the case of netizens naming and shaming a Go-Jek passenger after a recording of her went viral on social media.

For publication of personal information with the intention to harass (non-physical harm), the maximum penalties are a fine of up to $5,000, imprisonment of up to 6 months, or both.

But if the publication was done with the intention to cause or facilitate violence (physical harm), the maximum penalties are a fine of up to $5,000, imprisonment of up to 12 months, or both.

Help! What can I do if I’m being harassed?

Make a police report immediately at the nearest police station. Consult a criminal lawyer in Singapore if you feel you need to apply for a Protection Order (PO), or have any other questions regarding legal recourse against your harasser.

Take note that a standard PO may take weeks to be issued, so If you believe you are in immediate danger, apply for an Expedited Protection Order (EPO) instead. While it is possible to apply for a PO or EPO on your own, we recommend consulting a lawyer as the process can be complex for those unfamiliar with it.

If you wish to bring a civil suit against your harasser, a criminal lawyer can also help with that. The court may, to its discretion, award damages to you that it believes to be just and equitable, depending on the circumstances of your case.

What should I do if I’ve been accused of harassment?

If you have been accused of harassment, engage a criminal lawyer in Singapore immediately to ascertain the facts of the case. Should the facts point toward harassment on your part, you will need to work closely with your lawyer to work out what steps you should take next to build your case and achieve the best possible outcome.

At Tembusu Law, our highly experienced team of criminal lawyers are comprehensively trained in handling cases related to harassment, including sexual harassment, and will always work to protect and safeguard your best interests. Contact us today if you need any advice regarding criminal harassment cases in Singapore.